May 10, 2021 is the 10th anniversary of the establishment of “Kung Fu Food”. In the past 10 years, Kung Fu Food has experienced various ups and downs and encountered difficulties. However, we relied on our excellent team spirit to get through, and at the same time always give priority to product quality and service quality. 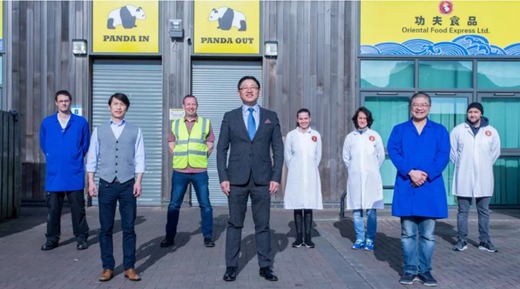 Oriental Food Express Ltd is a British-based manufacturer of Chinese frozen food and an international import agency. We were founded in 2010 in Shrewsbury, central England, the birthplace of Charles Darwin, with offices in London and the Hague, Netherlands. We produce award-winning dumplings and hot-pot meats, siu loong bao (soup buns), traditional steam buns and a growing range of fried and dim sum products. As an importer and wholesaler of premium Chinese and East Asian food and beverage brands we represent companies from China, Japan, Korea, Malaysia, Thailand, and China, introducing them to the UK market.

Our brand logo – a dancing panda with chopsticks – has become a symbol of great taste and quality among consumers, and in addition to our core Chinese market we have many loyal British and European customers. Our trademark, registered across Europe, also embodies our mission as a company. We came from China and our mission is to spread traditional Chinese culture to western countries, through healthy and delicious food, “to innovate in Chinese cuisine and whet the European appetite”. Our corporate values prioritise high-quality materials, end products and services, and an ethos of efficiency. Our core business focuses on the production of Chinese food products, and we also act as an agent for other complementary food brands, introducing them to Britain and Europe.

The first Chinese quick-frozen food brand in the UK is born.

It would be impossible to describe the history of the Kung Fu brand without the entrepreneurial story of the founder, Zhiqiang Wang. It was the early 2000 and Mr Wang had just obtained his master’s degree in business management in the United Kingdom. While his fellow students considered which career path to take, he decided to start his own business and opened several Chinese supermarkets. Right from the inception of the business, Mr Wang harboured an ambition to bring traditional Chinese food to the UK, so the overseas Chinese population could experience the authentic tastes of their home country. With few traditional Chinese foods on the market at the time, Mr Wang devoted himself to creating an authentic Chinese food brand, which was to become the predecessor of Kung Fu Foods. It was a huge task, from selecting a site to establishing a working factory, along with product research and development, production, market launch and development of sales channels. But by the end of the year, the first British Chinese frozen food brand was born! The Chinese dumplings and hot-pot meat rolls quickly won the love of overseas Chinese and filled the vacant space in the British market for Chinese food.

2011 was a pivotal year for Mr Wang. A dispute with the founding team of his first company that led to his departure was a major setback. But Mr Wang was not afraid to start again, and this time he had ten years of experience and mature technology to start a new brand. With the experience gained from his first venture, Mr Wang decided to build a new brand around the principles of consistent, high-quality products that gain recognition with consumers and build a strong reputation. He strove to continually improve his products, introducing a range of new flavours of dumplings, Siu Loon Bao and hot-pot meat rolls. The brand was named Kung Fu Foods, symbolising the brand ethos of hard work and the effort of constant improvement.

The success of Kung Fu Foods was not accidental. Ten years of food manufacturing and product development experience allowed him to launch a ‘mature’ brand with high-quality products.

Before product-launch Mr Wang began to pave the way for the market, visiting each customer one-by-one to introduce the new brand and within one month of launch, the product had appeared in every Chinese supermarket in the UK. The Kung Fu brand was quickly recognised among consumers for its delicious, superior-quality products and the company rapidly expanded, ushering in a new era of local Chinese food brands in the UK.

Fifteen years ago, Daniel Wang obtained a master’s degree in Marketing and Management from the UK’s Loughborough University. Since then, he has worked hard in the food industry and also became a Christian in 2007. His personal beliefs inform his philosophy of humility and serving the public as Chairman and General Manager of Kung Fu Food. It is this philosophy, in combination with the business strategy of brand awareness that has led to Kung Fu Food’s indomitable position in the Chinese food market in the UK and Europe.

In 2010 mainland China’s economy took off, and a tide of Chinese students entered universities around the UK. At the same time, a burgeoning food market saw new food brands emerge in mainland China and Europe. Kung Fu Food emerged into this fiercely competitive market in 2011. In 2013 Daniel Wang joined the company as General Manager, and immediately began laying the foundations for the Kung Fu brand to enter Europe. There were several hurdles to overcome: the company’s capital chain was tight; the management team was inexperienced, and the sales channels were not smooth. Daniel addressed these issues with a hands-on approach, researching and developing new products and markets and studying management techniques from advanced Chinese companies, while adhering toan the entrepreneurial philosophy of “high efficiency, high quality and high return”. This strategy consolidated the position of Kung Fu Food. The company forged ahead and wrote a new chapter in the history of the overseas Chinese food industry by becoming the first UK Chinese food company to invest in a mainland Chinese venture with the purchase of a stake in the Fujian Anjing Food Company Ltd. 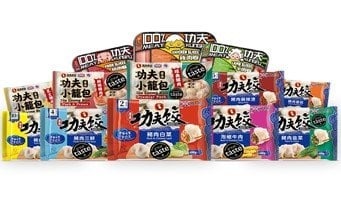 Kung Fu Food has become the leader in the Chinese dumpling and hot-pot meat rolls industry through its corporate values of ‘material-selection, quality and service first’, setting the standard for Chinese food production in the UK. Since the beginning we have resolutely refused to accept sub-standard ingredients or add harmful seasonings, flavour enhancers or preservatives. Our ingredients and processes are in full compliance with EU standards and the British Food Standards Agency. We purchase the freshest seasonal vegetables and the highest quality black pork from Scotland. Even the quality of the oil, salt, vinegar and sauces that we use are carefully vetted.

Kung Fu’s philosophy of “high efficiency, high quality and high return on investment” along with “strict requirements and high standards” have allowed the company to continually improve and make in-roads into new markets. In 2018, the dumplings were enthusiastically received by the British public when Kung Fu Food took park in the British Food Exhibition. The same year, five of Kung Fu’s products won Great Taste Gold Awards. Kung Fu CEO Daniel Wang said, “Or 10-year anniversary is approaching, and these awards mean a great deal to us. We are proud of the determination and efforts we have made to create award-winning products. We will continue to specialize in research and development and innovation and achieve our mission of “creating the best Asian cuisine and tempting European appetites.”